A downloadable Uncommon Breed for Windows, macOS, and Android

Want to support outside of Patreon/Itch?

Buy me a coffee @ ko-fi.com/sabremakesgames ^_^

Check out my merch @  panickedfox.games :3

Copied from my Patreon

Hey guys, I’m FoxBytez. I’m really into software development and sharing my, sometimes outlandish, ideas through the games I create. The dream is to forge a game studio capable of helping others follow their own aspirations. Whether it be art, animating, modeling, coding, story writing… there’s so much that goes into building games and I’d love to create a home for those passionate about their craft.
But that’s end game. The short term goal is being able to work on Uncommon Breed and similar games full time.

Current Project
At the moment, I’m working on the RPG / Visual Novel, Uncommon Breed. In this game, your relationships affect both story and combat! Recently, I’ve been lucky enough to pick up a couple of well equipped mercenaries:

These two talented individuals have have helped me bring a new level of quality to the game and your support helps me pay for their art/services.
At the moment, I update the game at least once a month. If I’m ever able to work on it full time, you can expect 2+ updates a month. 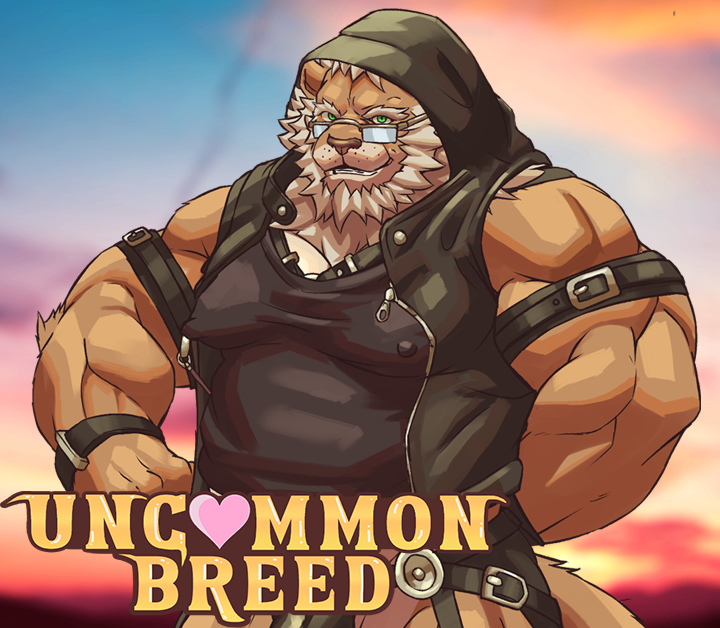 More than a visual novel
One of my core motivations for making Uncommon Breed was to learn the ins and outs of Unity (a Game Development Engine) with the intent of making more interactive/complex games in the future. This is why Uncommon Breed has and will continue to evolve as I take what I learn and apply it to the game. Examples of this are:

The PUB
A segmented dating world in which you can travel between multiple rooms and have brief conversations with the main characters. These conversations affect their affection towards you, the story, and the combat.

Combat world
RPG style, turn based combat system with your relationships affecting combat. Did you say the right things to Grizz, the burly bear tank? His defense capabilities increased! What about Reinhard, the X Bounty Hunter? His shots are gonna start hitting really hard!

Questing System
In the works! Quests will mainly come from the PUB. 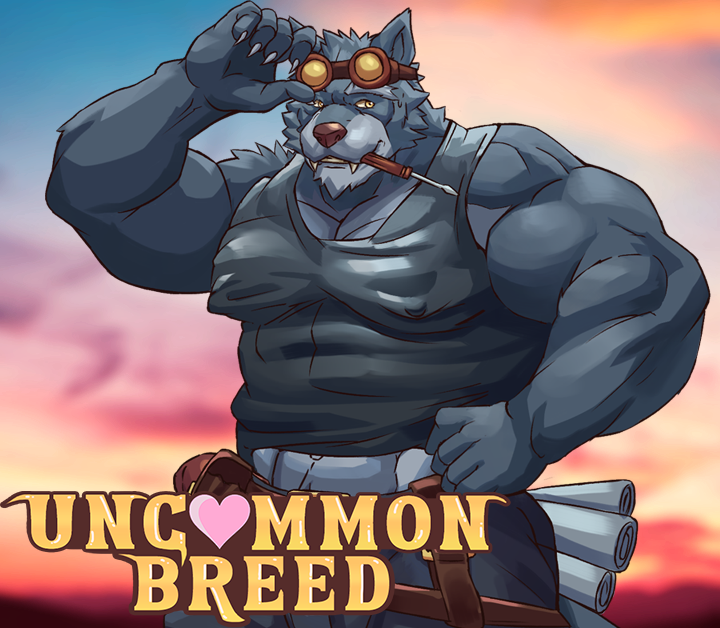 The story
Get plopped into the shoes of a developing hero character and bring together a band of outlaws to save your home. Strengthen your personal relationships and find that strength translates into your battles together. Get to know and romance them but be wary of leaving the strength of your other teammates behind! 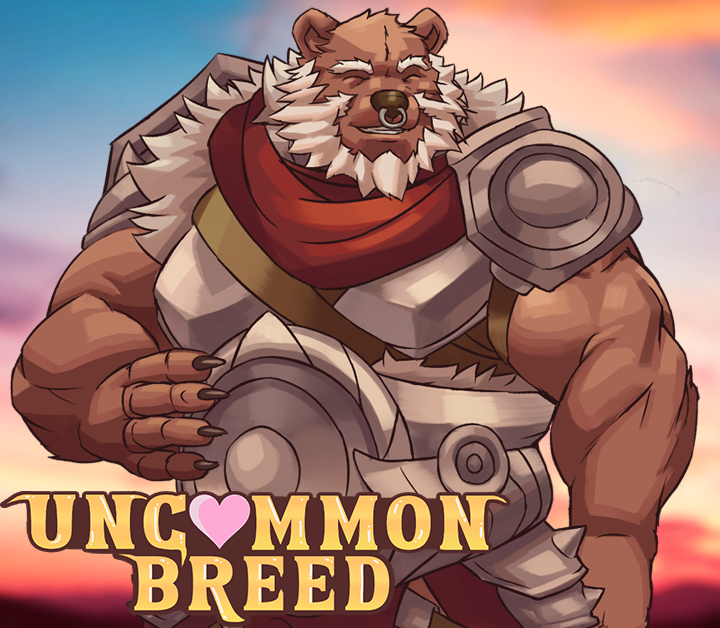 My Patreon page is set up with the Charge Up Front (CUF) model.
This means New patrons will be charged when they first sign up.

If you pledge late in the month, say the 28th, you’ll be charged on the day you sign up and the beginning of the next payment cycle (the 1st of every month). This makes it best to pledge at the beginning of the month to avoid being charged back to back.
This is patreons way of helping alleviate content theft and helps your exclusive rewards remain exclusive!
Current patrons are unaffected. 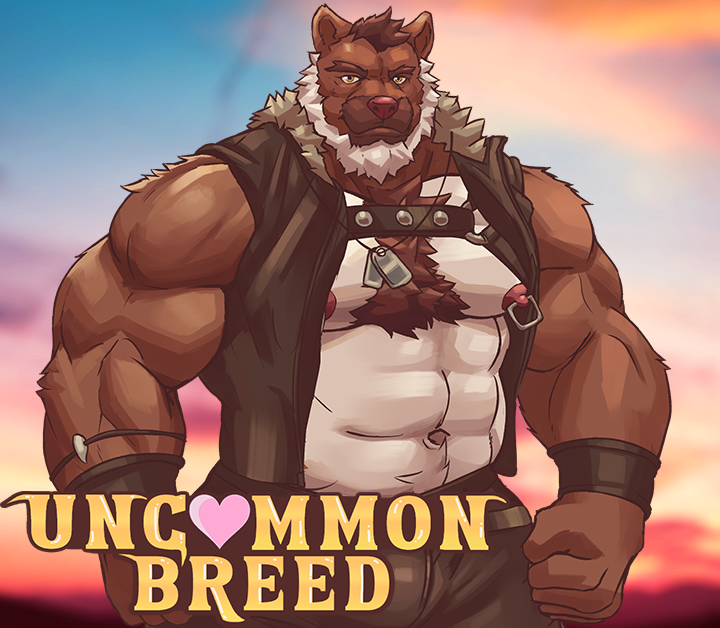 In order to download this Uncommon Breed you must purchase it at or above the minimum price of $5 USD. You will get access to the following files:

As I understand it, day 14 (before the battle with Zephyr) is the last thing in this novel.
Positive: an interesting story, there are memorable characters. The visual is different for everyone, but I liked it.
Negative: The implementation, the presentation of the story is bad. The dialogues seemed to be written with a difference of several weeks. The choices you make are not felt. Their consequences are not felt. If you choose a character and build a relationship with him, then literally after a couple of scenes there is a feeling that you are seeing each other for the first time. The transition between scenes is also so-so. Battle scenes are not needed in this game. If you cut them out, nothing will change.
If the author ever completes this novel (or rather reworks it), pays attention to reviews and criticism, then honor and glory to him.

someone can help me?

i bought the game but it doesn't open, i tried to look for something similar here in the comments and found but still didn't open so, someone knows what to do? (My  mac version is masOs Monterey version 12.5.1)

I sincerely hope you somehow asked for a refund. This projects seems to have been abandoned without the creator telling anybody publicly.I doubt he will fix any bugs or compatibility issues in the future.

Do you have Chinese

Is there a guide anywhere?

I think this VN is nice but for rich people only.. Hhhhe. Not for the poor.. Hyss

Hey Kiddo! You're not supposed to be here! 😱 Go back in your bed. 🤣

Well hope at some point in the future the developer will continue with this game. Only comment is ive been playing Grizz path but when you get to the parts with Koa its like you and Grizz never happened, and has no interest in you anymore.  Where did the love go :(

I feel like what wad the point of updating in the current bugs werent even fixed. I would rather have heard this game was being put to a halt because of another game being worked on rather than putting out something that's half finished and still full of bugs. People cant even play the android version cause it constantly crashes and. The game cost $5 on top of that. No hate but again it would have made more sense to say this game is beeing put on hold and then to come back and actually fix all the bugs and crashes when your ready.

The developer probably doesn't care anymore since his now main project Lust promises bigger revenue (active Patreon membership required to play; yes, that's rent DRM for an early alpha single player game). He even disabled comments there on itch just to (allegedly) silence criticism. He probably will do this here since I mentioned it.

His last comment was 10 months ago in here? So yeah.

And yes, this whole story left me a bit tilted. Sorry, developer.

Patreon has up to UB 40. Seems the creator decided against updating the itch.io page.

Well, i really hope he cont to update the game

Hello, anyone heard if the day 14 is an issue or just the last bit of the story so far?

what just happened to day 14 it's looks like it's stuck

The game stops advancing at day 14 for me. Hope to see it get fixed soon.

Why the android keeps crashing? When is it gonna be fixed?

I can't seem to load my save files... When I click yes, the game just does nothing

Anyone else stuck on Android Day 12?

I stuck in day 14 and game doesn't go futher.

I manage to run it nvm, great game!

uuh is there anything besides unity needed to run this game on windows? once I get through the tutorial battle the game becomes unresponsive

ub39 btw. The game is still playable (if I choose the no-tutorial option), but might be something worth looking into. I also can't seem to load autosaves.

Is there a guide anywhere?

If I buy the game and its updates doni have to buy the updated  version  of the game?

No, just when selecting the download choose the option that you've bought this game before. Then the site will send you an email to your itch.io with a redownload list of this game and all other games you've bought off this site

is there going to be a chat log? cause my brain is really bad at recalling what was asked before making a decision

So my question for this game is can I be a hoe. Can I romance more than one person or does trying screw up my chances with certain NPC.

just do it in real life

I'm playing on android and it crashes constantly. I cant even get past the tutorial cause the screen goes black

I just figured out, that doing the dungeons to level-up the characters is "somewhat" crucial in order to progress in the story...lol

But it looks really promising - will the dark/empty sprites still be filled at some point of the development, btw.? Or are they just "shadows" to represent "anonymous NPCs" and intended to stay that way?

I have downloaded it twice and both times it wouldn't open. It says, code execution cannot proceed because UnityPlayer.dll was not found.

My Android game keeps crashing is it fixable plz help

Anyone know who's route is getting covered this update?

I finally got to playing this, and every time I hit new game, it crashes. Anything I should do to fix this? (Android btw)

I have a question  how much money someone get for a furry commission?🧐

Fucking shit tons. Someone once said the art world is controlled by art buffs and museum people and suspiciously rich furries. Also art takes forever to make because it has to be worth what you spend so the price has to match the effort+time the creator puts in so like usually a lot since it can days sometimes to create something or just a couple hours (even though a couple hours is still long as fuck when your doing work and the added detail of a couple hours usually being somewhere between like 10 hours to 15.)

Someone said this about 2 months ago and din't get a reply so guess  it's my turn. On day 12 during you session with the person of your choice a random White bear (Kao) comes into t he middle of the  scene and start telling you and the group what to do when i have not meet this white bear yet so maybe some  files or coding  went wrong. I found him in   all 4 of the session.  Hope it get fix soon so the story can make sense lol

Looks like version 35 is not correctly marked with platforms, and therefore isn't downloadable in the client. Any chance of a fix?

Rein and Julian have full NSFW scenes with CGs. Gear only has a text-only one. Grizz has nothing besides a scene that gets interrupted before it starts.

I have a Mac and I still can't play this game. it won't open. I haven't ben able to play in a long time. how can I get it to play? 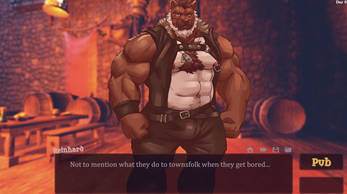 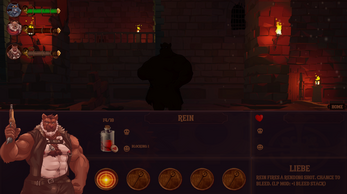 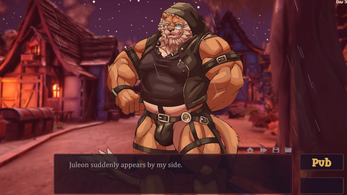 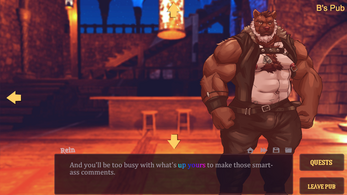 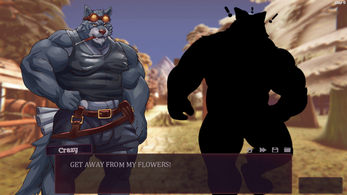 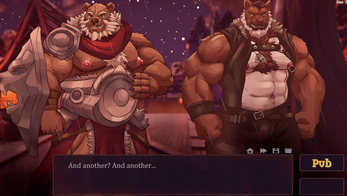